The above pyramid is illustrative of the principle. The aim is to find and offer any transport infrastructure that cyclists can use for everyday cycling, which usually is not more than 5-7km. It is necessary to provide links between towns and cities (layer 4); it is only then that the cycle tracks can be numbered as local, regional, or long-distance, or even EuroVelo.

The priority is finding a safe way for cyclists. It should be noted that the map app is not designated primarily to describe current status, but to view the outlook. 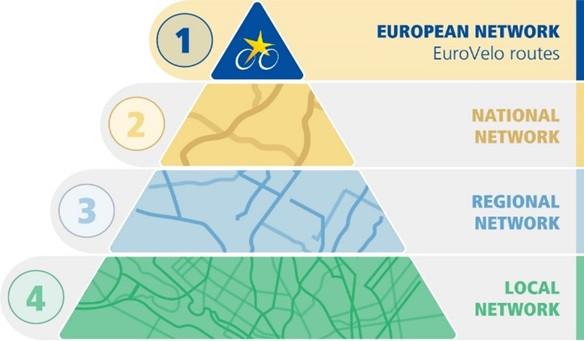 As we know, the Eurovelo, long-distance, regional and local cycling network was marked out at the beginning of the 21st century, when there were hardly any newly constructed and separated cycleways, therefore the cycle tracks were led on existing local and utilitarian roads which have become very dangerous due to increasing motor traffic intensity.

So far, the discussion has focused more on the difference between a cycle track and a cycle route, while the cycling network will blur the difference. All activities should aim to reach the main goal, which a safe and continuous cycling network is. Local cycling network is the basis, consisting of many types of cycle routes and transport measures to facilitate cycling. This continuous network is primarily designated for local cyclists and for everyday cycling up to 7km, resp. 20km on e-bikes. There's also a network of safe local, regional, long-distance and European cycling routes with relevant marking for better orientation, used by leisure cyclists or bicycle tourists. When cycling is their leisure activity, people usually ride from 20 to 100km/day, depending on their free time and level of physical condition.

How many cycle tracks are in Czech Republic? You read HERE.